Restricting Movement During Times of War

The world between 1850 and the beginning of World War I was in what some historians call the first true era of Globalization. People, goods, and ideas were moving more freely and rapidly across the globe than ever before  (Steger). This development, championed by people who supported economic liberalism, was not welcomed across the board.  Even before the war, some governments had been exploring ways to increase the regulation of the movement of people and goods within and between countries. 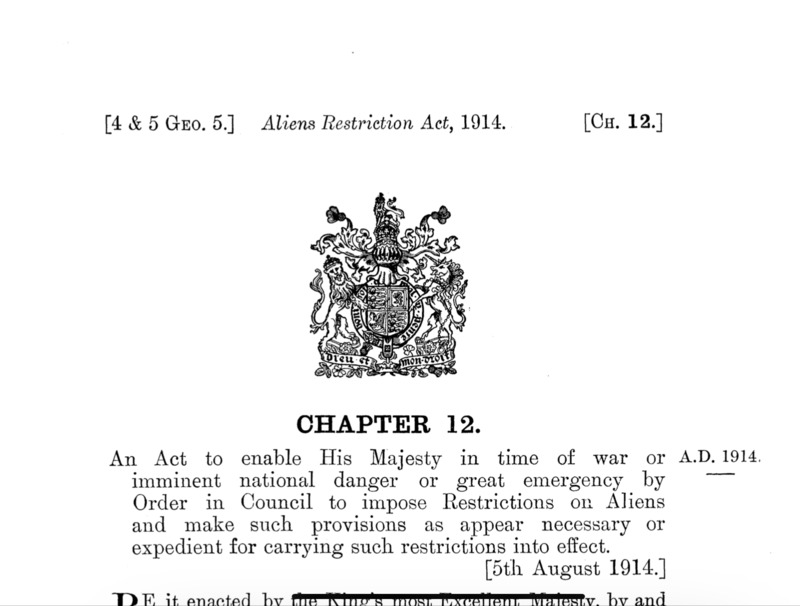 When World War I began, most nations moved towards increased passport controls for foreign travel. They also required various forms of identification and regulated  freedom of movement within national boarders (Pearsall). Passports, identity cards, employment record books, and various forms of civilian and military papers were instituted as requirements for people to move between countries, around their own country or the one in which they were stationed for military duty, or even to move between jobs.

World War I - Legal Restrictions in the UK as an example

The day after war was declared, the British Parliament passed the Aliens Restriction Act. This law required foreign nationals to register with the police and gave the government power to intern or deport these people as needed. Aliens Restriction Orders were also issued which designated areas forbidden to “enemy aliens” and which restricted their movements (Steger). In 1915, the Munitions of War Act passed. It included, among other things, provisions to suspend trade union regulations, to employ women in the munitions industries, and to restrict the movement of laborers between jobs (Torpey).  These two acts demonstrate some of the legislation that initiated a requirement for permits, papers, and identification for the movement of peoples during the war.

Between World War I and World War II, many, though not all, of these restrictions were relaxed.  As the build-up to World War II began, however, countries again placed restriction on movements of citizens and non-citizens alike. In 1939  the UK, parliament passed the National Registration Act which required all men, women, and children to be registered for an identity card. These cards were to be presented to authorities upon request and played a role in keeping track of military and civilians alike. From 1941, unmarried women were required to register for war work. If called up they could choose between the services and working in industry (Mason). Germany's Third Reich began working to control labor well before the war began. In  1935 the Arbeitsbuch or "employment record book" system began. Workers were required to record their personal information such as birthdate, residence, etc. and turn the record book in to their employers with each change of job. In 1938, decrees passed limited the movement of laborers from one job to another and also allowed the government to displace workers to needed areas at will (Polish German Reconciliation Archive).  Both the German and UK examples demonstrate how labor also became an aspect of what historians call "total war" or the mobilization of all resources towards the war effort. 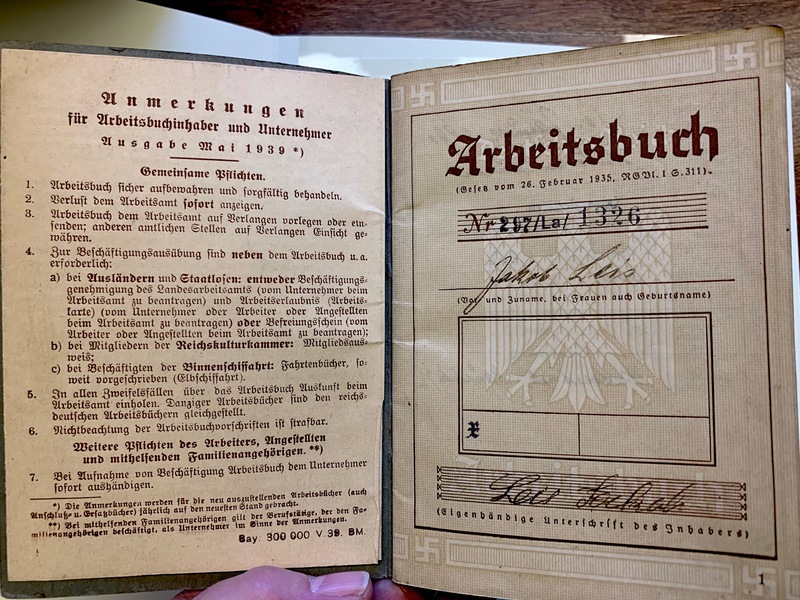 The Arbeitsbuch of Jakob Leis

The  Arbeitsbuch or "employment record book" of Jakob Leis dates from 1936 and is one of the items found in Norlin Library Special Collections and Archives. Jakob Leis was born in 1890 which would have made him 49 at the start of Word War II. The book records his employment between November of 1936 and April of 1943 for several engineering and construction firms. Click on the picture to get a full translation of the text at the start of the Arbeitsbuch detailing some of the regulations for its use. Requiring laborers to register and restricting their movement from job to job during the war enabled the German government to more tightly control war-time production of everything from housing to munitions. 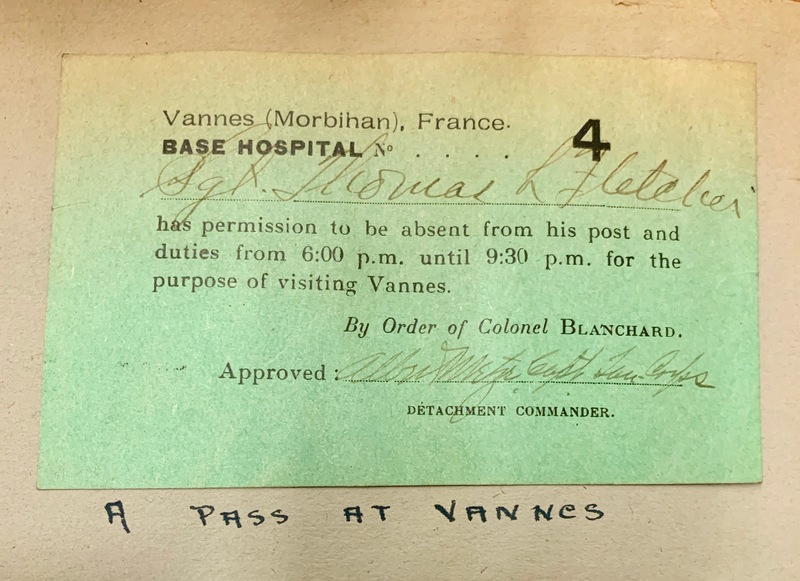 Perhaps a more familiar kind of control existed within the military of various countries during the war. Wherever troops were stationed, they usually had to carry identification and obtain permission every time they left their official posts. The final item highlighted here is a day pass issued to Sgt. Thomas R. Fletcher of the  U.S. Army Medical Corps while he served at an army hospital in France during the war. The pass indicates that he was given permission to leave for the day to go into the city of Vannes. Issuing passes and keeping records of soldiers away from the unit was an important part of regulating movement from the military perspective. Knowing who was on leave and when they were due back was part of this record keeping, but it was also important in the case of an attack. Knowing who was supposed to be where would save time in searching for casualties or the missing.

The selection of documents of everyday life during the repression times: Historical background and formal characteristics. The  Foudation for "Polish-German Reconciliation" Archive, Warsaw, 2009. http://www.fpnp.pl/edukacja/dokumenty_eng.pdf

Torpey, John “The Great War and the Birth of the Modern Passport System” in Documenting Individual Identity: The Development of State Practices in the Modern World, Jane Caplan and John Torpey editors, Princeton University Press, 2018.