Music in the Medieval Church

One aspect of the Medieval Church that was important from parish churches to monasteries to the great cathedrals was the music. During the Middle Ages, music notation began using square notes (neumes) on a staff in a form that was the precursor for modern music notation in the western world. The sacred music used in liturgy was mainly done in the style of Gregorian chant using a single (monophonic) melodic line with no harmony or instrumental accompanyment.  It is named Gregorian after Pope Gregory the Great  (r. 590-604) who is credited with revising and collecting the texts and chants for worship. This style remained prominent until well into the mid 13th century when it was overtaken by polyphonic compositions with multiple melodic lines being performed simultaneously. Other musical forms of this era included organum, the singing of fixed melocy lines at a fixed interval such a a fith, canons (or rounds) as well as simple harmonies. 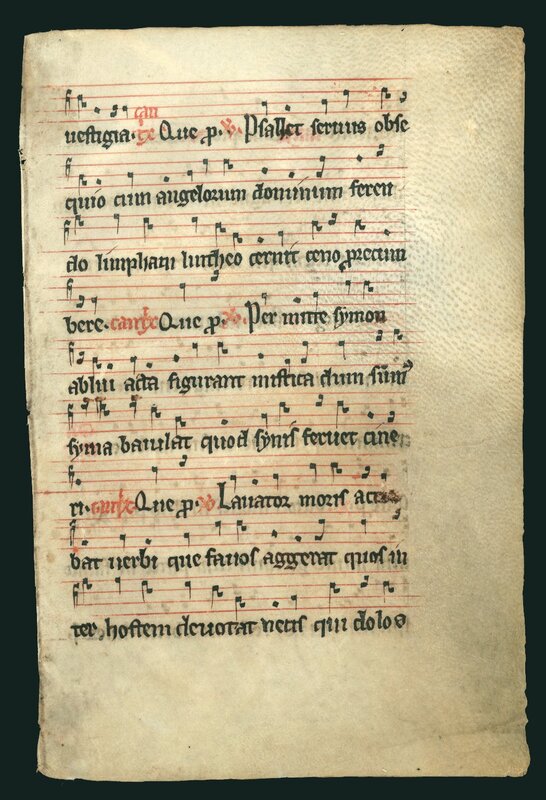 Musical Notation and the Role of Music in the Medieval Service

The piece featured above comes from a gradual or book of chant collecting music used in the liturgical celebration of the mass. the term gradual can also refer to as specific part of the mass sung in celebration of the Eucharist usually after the reading of the Epistle and before the Alleluia.

While we know little of this musical leaf's provinance since it is a single item removed from its original binding it highlights the style common in music notation during this era, as well as the prominance of music in the church. Such notations were made to help pass the music from generation to generation rather than monks or priests having to learn all their liturgical music by ear. 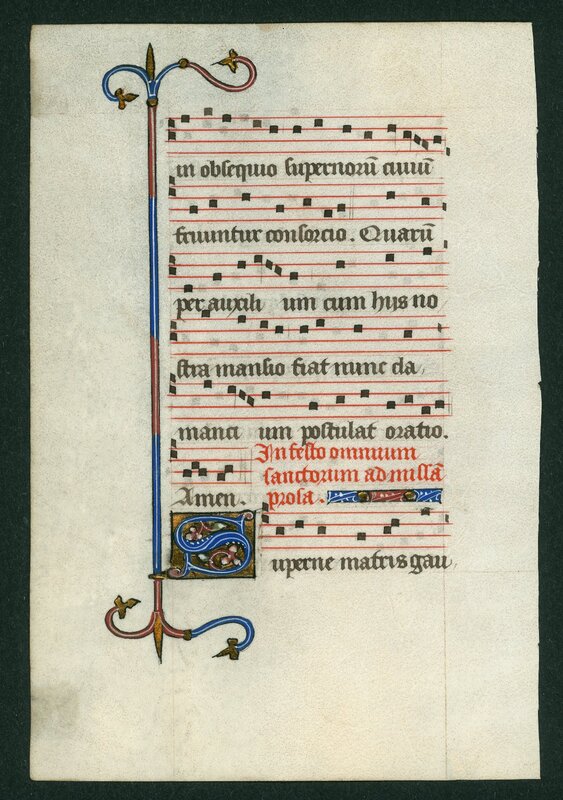 Music in a Monastic Setting

This second leaf from a French manuscript was illuminated with a border in blue and pink and an illuminated initial letter S towards the bottom of the page. The slightly more ornate illumination demonstrates that music manucsripts, like texts, could be embellished. This is suspected to have come from an abbey, according to the catalog description. Monks were the most common source for illuminated manuscript production. 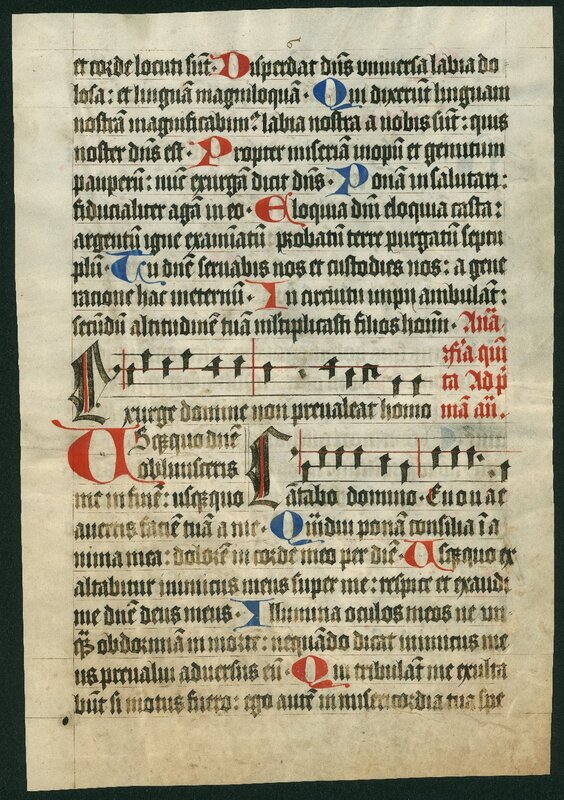 This page from an Antiphonary shows how text and music were combined for use in the liturgical choir. Works like this would have contained the chants for the Divine Office for every day of the year.

St. Benedict's Rule - Chapter 16: How the Work of God is to be Performed During the Day

“Seven times in the day,” says the Prophet, “I have rendered praise to You.” Now that sacred number of seven will be fulfilled by us if we perform the Offices of our service at the time of the Morning Office, of Prime, of Terce, of Sext, of None, of Vespers and of Compline, since it was of these day Hours that he said, “Seven times in the day I have rendered praise to You.” For as to the Night Office the same Prophet says, “In the middle of the night I arose to glorify You.”

Let us therefore bring our tribute of praise to our Creator “for the judgments of His justice” at these times: the Morning Office, Prime, Terce, Sext, None, Vespers and Compline; and in the night let us arise to glorify Him.