Pope Urban II, gave a powerful speech to The Council of Clermont in the year 1095. He addressed the church hierarchy and a crowd of laymen. He was calling for The First Crusade. Pope Urban II claimed they were the race beloved and chosen by God to take back Jerusalem from the Muslims. He claimed the Muslims hearts were not right with God and they had violently invaded Christian lands and depopulated them by pillage and fire. Urban claimed Christians were being killed by cruel tortures and the Muslims destroyed the churches of God and were using them for their own religions. He also accused them of destroying the alters and defiled them with their uncleanness. (Robinson 312-316). Urban called for all Christians in Europe to war against Muslims. Urban fused the idea of pilgrimage and penance with the more radical notion of papally-sanctioned violence to attain salvation. Urban followed the speech at Clermont with a preaching tour through France and sent out letters and legations elsewhere in Europe. (Phillips 1997)

Christian-Europe was one of the most guilt-ridden societies in history. The images of fire and torture illustrated on church walls fortified the fear of eternal damnation. (Phillips 1997).  With Urban promising atonement for their sins by joining the crusades almost 60,000 ethnically diverse Europeans joined the cause. His appeal was initially directed to knights that had been violent and lawless. He wanted to direct their violence elsewhere, as well as give the knights the opportunity for salvation. There was a large response from the knights therefore creating the backbone of the Christian Army. With Urban's enthusiasm and convincing nature not only did the knights respond, almost all the elements of societies joined the crusades including non-combatants, women, children and the elderly. The only exceptions were kings and bishops. (Phillips 1997) 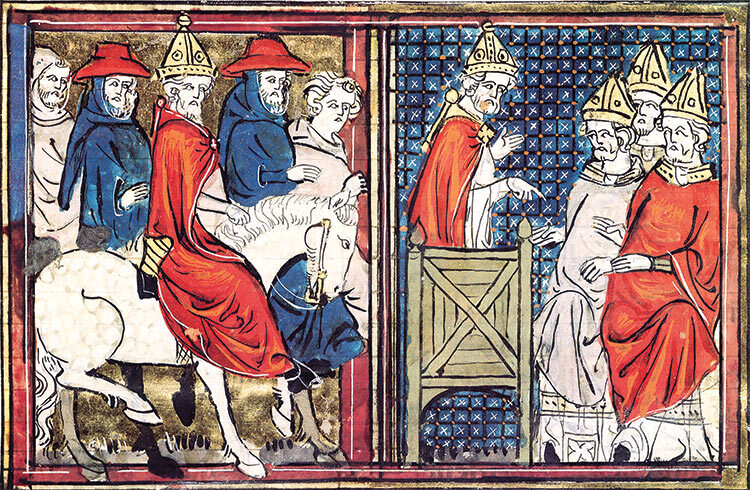 The Council of Clermont and the arrival of Pope Urban II

The Journey to the Holy Land

What began as a request for military assistance turned into a campaign to defend Christendom and reinstate Christian control over Jerusalem. Roughly a year later the crusaders set off on a very difficult journey of nearly 2,000 miles to the Holy Land. The knights were armored on horseback wearing tunics with red crosses and the poor peasants branded their flesh with the signs of the cross (Lawler). The length and hardship brought on by the campaign exhausted the resources of the very expensive crusade. During their march food prices became grossly inflated and losses of horses and equipment were colossal. Battered and bruised the crusaders marched on.  Along the way they fed on the land, on which they fell like locusts, and had to fight other Christians who defended their goods and crops. (Gonzalez 346). Those that joined the crusade because of poor economic conditions were quickly disappointed. The calamity of the expedition soon discouraged them and many deserted the main army unable to endure the experience. (Phillips 1997)

The Crusader armies crossed over into Asia Minor during the first half of 1097 where they joined Peter the Hermit and the remainder of his small army. Their first target was Nicaea, previously a city under Byzantine rule.  The crusaders engaged in a lengthy siege in Nicaea, resulting in heavy losses on both sides. With much tenacity and creativity, the crusaders were successful in the siege of Nicaea. (Princeton), 101-103. 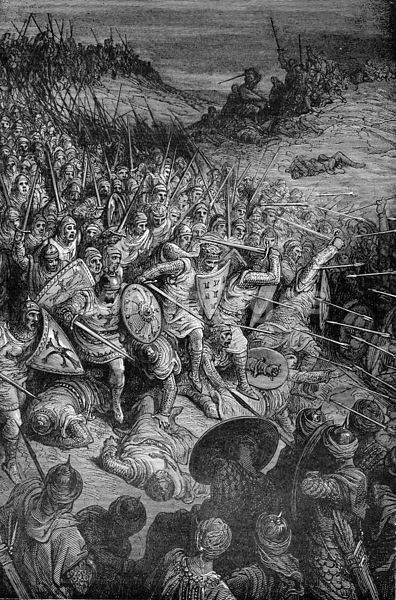 The Crusaders Defeat the Turks

Following the win in Nicaea the crusaders marched on through Anatolia. Byzantine troops joined the crusaders then divided into two easily managed groups. One led by the Normans the other by the French. The Normans left ahead of the French planning a rendezvous point in Dorylaeum, however the Normans were quickly attacked by Kilij Arslan. Completely surrounded the Normans went into a defensive position surrounding their equipment and the non-combatants. They sent for help, and when the French arrive Duke Godfrey broke through the Turkish lines sending them fleeing instead of turning to fight them all. (Brundage), 49-51.

The Crusaders set out to Antioch in October 1097. Antioch was located on the crusaders route between Constantinople and Jerusalem.  By capturing Antioch, the crusaders would be able to secure lines of supply and reinforcement to the west. Antioch was a large city, too large for the crusaders to completely surround and as a result it was able to stay partially supplied. They had to find ways to take over the city.  By January hundreds if not thousands of crusaders died of starvation. Lord Bohemond heard that countless Turks were coming against them. He sent out knights to take them over even though their numbers were less than the Turks. They engaged in battle with violence and God's favor, they defeated the Turks killing and capturing many of them. The crusaders were rewarded with horses and many things that they needed to continue on. The siege continued to drag on while the crusaders were still struggling with starvation. They defeated a second Muslim army in February and with that victory there were more men and supplies that arrived in March strengthening the crusaders. At this point they were able to completely surround the city all the while becoming stronger and gaining better living conditions in the siege camps. The end of May Bohemund contacted an Armenian named Firouz, who commanded one of the city's gates. Bohemund bribed Firouz and he opened the gate on the night of June 2/3 allowing the crusaders to enter and take over the city. (Hickman 2020) The crusaders had finally won the city of Antioch after eight months of diligence and faith. 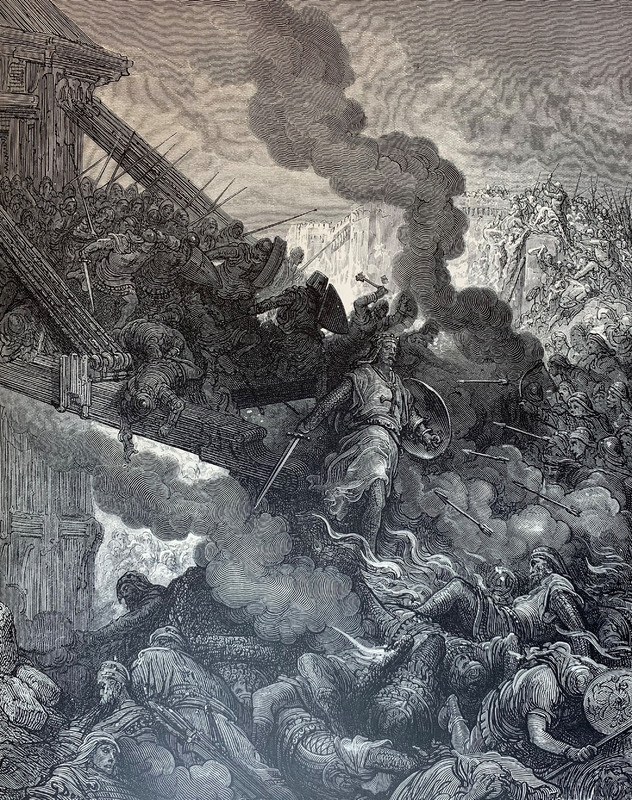 History of the Crusades 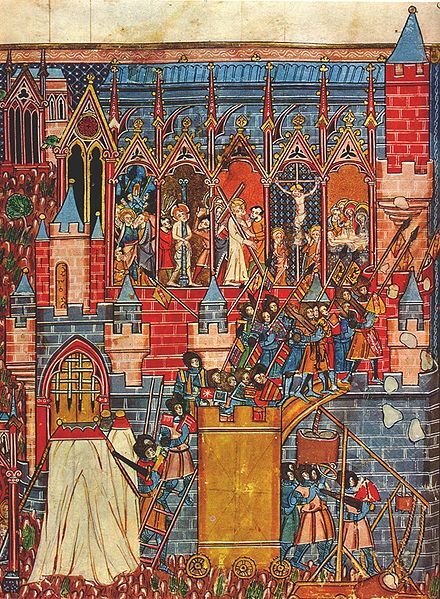 The Capture of Jerusalem

After the Siege of Antioch, the Crusaders remained in the area for the rest of the year. Some Crusaders established themselves there while others started their own campaigns to march on Jerusalem. The march started in January 1099 heading towards the Mediterranean coast. June 7, 1099 the Franks besieged Jerusalem. The Crusaders saw how difficult it was going to be to take the city. On the west was the tower of David, which is flanked on both sides by the broad wall of the city. The lower half of the wall is solid masonry, of square stones and mortar, sealed with molten lead. (Fulk of Chartres). The Crusaders had to come up with a plan on how to overcome the well protected city. The leaders ordered scaling ladders to be made, in hopes the Crusaders could scale the walls and take the city. The ladders were constructed and the assault commenced. They attacked the city from all sides but they discovered they were still not able to enter the city, so the attack was halted. A council was held and it was ordered that siege machines should be constructed. When the tower had been constructed it was covered in hides and moved near the wall. A few knights took their places in the tower and began to shoot stones and arrows at the sound of the trumpet. The Sacreans defended themselves with slings, firebrands (which had been dipped in oil and fresh fat). Many on both sides perished on this first attack. Trumpets sounded the next day and battle began again. The Franks used a battering ram to pound through the wall, which was successful. The Saracens tried to defend the wall by suspending two beams before the opening. Eventually the ropes were cut that were suspending the beams and they caught fire due to the firebrands the Crusaders were launching. The flames and smoke became so bad the defenders had to stop defending the hole in the wall. Noon the next day the trumpet sounded and the Franks entered the city. The defenders lost all courage and began to flee through the narrow streets of the city. On the other side of the city the Crusaders saw the Saracens leaping from the walls so they rushed into the city to pursue and kill the enemies. Some Saracens, Arabs and Ethiopians took asylum in the Tower of David, others fled to the temples of the Lord and of Solomon. The enemies were cornered in the temple of Solomon and were shot with arrows and killed. In the temple of Solomon almost ten thousand were killed. (Fulk of Chartres). None of them were left alive including women or children. The city fell July 15, 1099 after a week of slaughter. 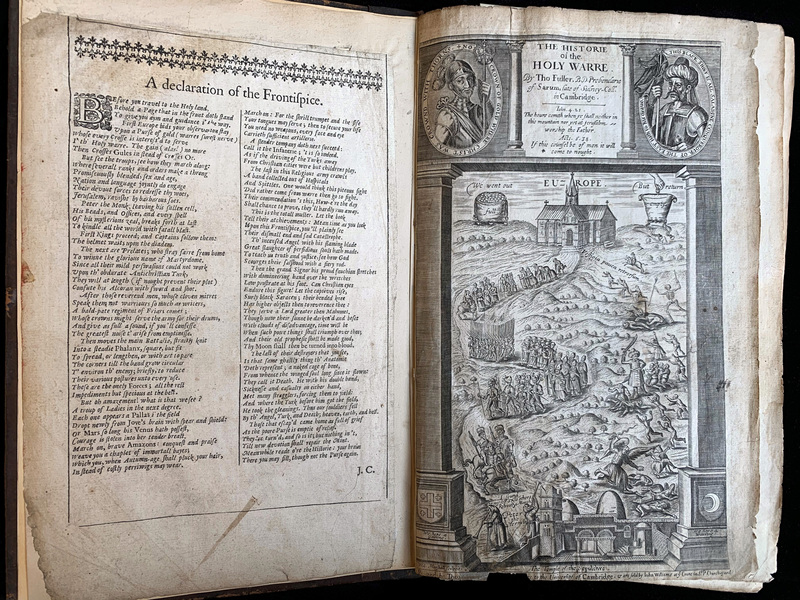 Historie of the Holy Warre

Thomas Fuller's Historie of the Holy Warre (1640) provides one of the earliest accounts of the Crusades written from an Anglican point of view.

The Crusaders began a widespread massacre of the Muslim and Jewish populations. This was to "cleanse" the city.  believing the Jews had killed Christ. Jews who took refuge in the main synagogue were burned to death. The Crusaders seized gold, silver, horses and mules and invaded houses in search of loot. They also burned heaps of bodies of the Saracens who they believed swallowed precious metals, they believed by burning the bodies they would be able to retrieve the coins from the ashes. There were some Crusaders who felt guilty and disgusted by this type of behavior.

The Crusaders attained their goal three long years after they had set out. They made their way from western Europe to the Middle East and conquered two of the best-defended cities at the time. The Crusaders believed their victory was God himself who worked the miracles for his faithful knights. This belief would sustain centuries of Crusading.

Godefroi, R. (1337). The Council of Clermont and arrival of Pope Urban II, The Crusades | History Today

Lawler, A. (2018). Reimagining the Crusades. Archaeology.org