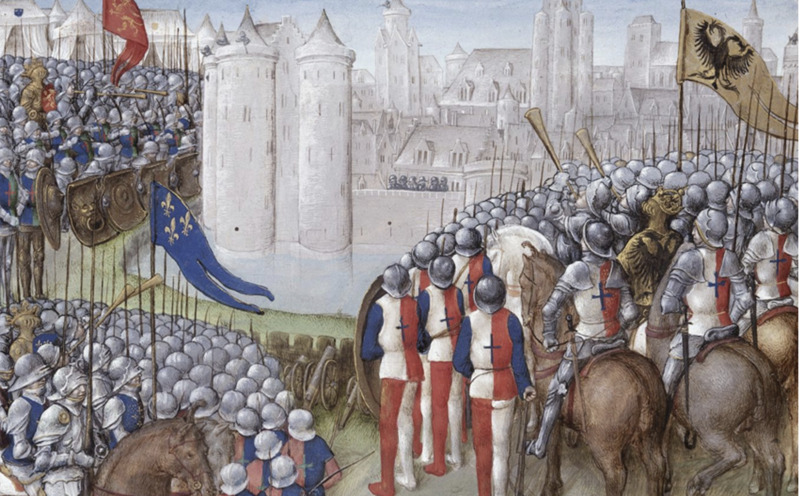 In 1095 Pope Urban II called for a war against Muslims in order to reclaim the Holy Land. The inital promise was that it was a divine war in accordance with the just war theory. The crusade was meant to defend Christianity from foriegn invaders. During the era it was believed that the end times were near and the crusade could also serve as a pilgrimage. It was believed that a pilgrimage would forgive serious sins, pairing this up with the promise from the pope gave many Christians a good reason to participate in the Crusade.

It is important to note that the sins being forgiven was not the only the reason people participated in the Crusades. There are many more factors at play than religon. 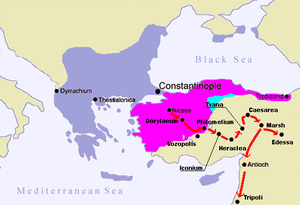 Route of the First Crusade

The Crusade began with about 4,000 cavalary and close to 25,000 infantry men. In the first few months they took Nicea and then Antioch. They first conquered Antioch, then defended it from Turkish armies. After a few months recovering from the battles they marched to Jerusalem. The battles were very gruesome, and there are accounts from the battle of Jerusalem that make it sound like it wasn't much of a battle and more like a slaught with lots of pillaging. Ralph of Caen saw the battle of Jerusalem from a nearby city and his account makes it seem like a slaughter.

"The scurrying people, the fortified towers, the roused garrison, the men rushing to arms, the women in tears, the priests turned to their prayers, the streets ringing with cries, crashing, clanging and neighing." 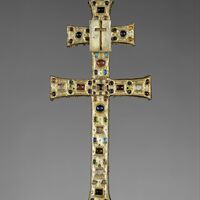 After the battle at Jerusalem, many cathedrals were built and remaining Muslims and Christians lived together in the city. It became normal for artisans to meet up in the city and collaborate on items they were working on. Around 1180 artisans were tasked with building a cross that was believed to have a fragment of the cross Jesus died on inside of it. With all the wealth and power the Church had acquired, items such as this one were made for the Church all around. Some inscriptions even include the signatures of Isalmic artisans which highlights how Islamic traders were hired by the Church to craft items for them. The First Crusade was the most successful Crusade as there were many problems with the following Crusades.

The Crusades left an impact on may parts of the world as well as Christianity. The crusades resulted in a militarized church which would lead to the creation of groups such as Templar and Hospitaller Knights. These resulted in the Order of the Garter which advertised recruitment for the crusades. After the First Crusade, the prestige of the Pope as well as the papacy was at an all time high. However the following Crusades diminished the power that they had gained as the following Crusades failed and were look at as a means of looting. The church profited from the Crusades though as they enforced taxes to support them. The Crusades also resulted in the end of the Byzantine Empire with the sacking of Constantinople.

The word Crusade now has a very negative connotation with it since the Crusades involved a lot of meaningless death, destruction and pillaging. It's a very negative moment to look back to in history.  What makes it more interesting is that the word Crusade has been used the United States to describe what they're doing in other countries. In World War II General Eisenhower gave a speech summarizing his campaign in Europe "Crusade in Europe".  Another use of the word has been after the attacks on 9/11 when George W. Bush compared his war on terror as a "Crusade". It's kind of scary when the government specifically chooses a word such as Crusade when there's so much history of death and destruction tied with it.