Monasteries evolved greatly from their roots in the 3rd century CE. In this time, Christians were often persecuted for their religion, and they escaped into nearly inhabitable remote areas. As the number of Christians fleeing persecution grew, groups began to form in the secluded mountains to create communities where they had to work together to survive. They took this as an opportunity to turn their backs on worldly possessions in favor of a hermit-like lifestyle with time to dedicate to God.

The idea of monasteries spread across both the Byzantine and Roman Empires, and the rise in the popularity of monasteries led to a series of orders to express the ideas and missions of these communities.

For this article, I will be exploring life in medieval monasteries through the impact of the Benedictine Order, daily life, recruitment, and the myth of the single-sex experience.

The Order of Saint Benedict

The Benedictines followed the orders given by Saint Benedict regarding the life of monks and the structure of monasteries. The order was received in 529. The Benedictines believe in authority over the individual monastic communities to be held by abbots and abbesses. These special positions are to be held by someone who can teach others that their deeds are more holy than words, God’s commandments, and follow the law of God, and the abbots and abbesses are tasked with loving all in their community equally to keep their souls in good health. (St. Benedict).

Benedictines focus on good works within their monasteries. These good works start with devotion to God, then each other, and so on to follow the teachings of Christ. To remain focused on Christ, Saint Benedict’s order required people to live in poverty. Also, Saint Benedict insisted every individual performing good works in the community would lead to stability. Another part of stability for monasteries would be obedience to God, and as an extension, obedience to the Lord. 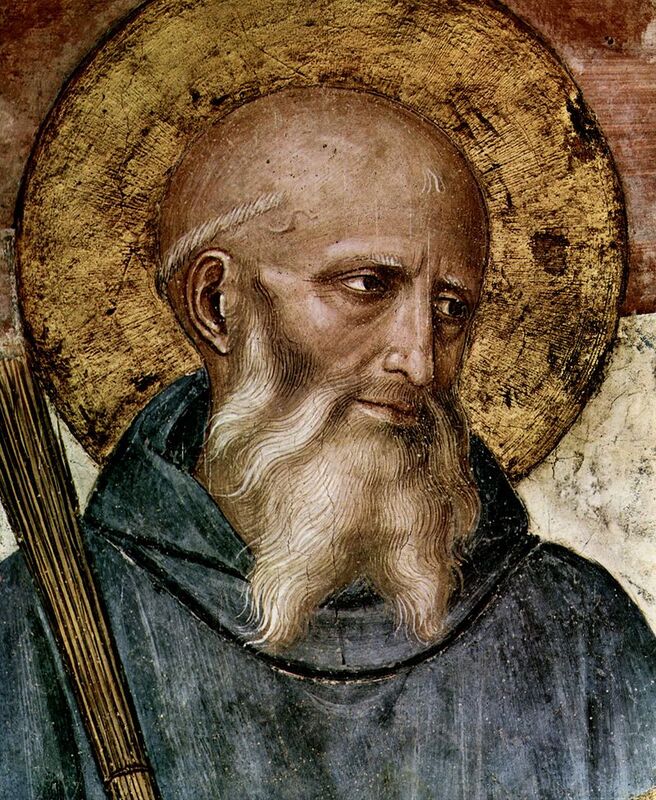 Saint Benedict of Nursia (480-543) who's order was used to establish rules for monastic life.

By the Middle Ages, the growth of monasteries was substantial. Not only did numbers increase, but the amount of money funneling into these groups did too. Monasteries were able to build grand buildings on large plots of land from the tax relief and donations they received. In addition to having more time to devote to their spirituality, the money also allowed for physical labor to become:

“less of a necessity for monks who could now rely on the efforts of lay brothers, hired laborers of serfs (unfree laborers). Consequently, monks in the High Middle Ages were able to spend more time on scholarly pursuits, particularly producing such medieval monastic specialties as illuminated manuscripts” (Cartwright).

The monks who weren’t assigned to scribe had other tasks to keep the monastery running smoothly. The abbots and abbesses could send monks and nuns away on business, but for the typically day-to-day, the individuals stayed on the grounds. Daylight was important in the Middle Ages, so monks began their day at sunrise. They would pray, attend Mass and go to any meetings, start chores, attend a second Mass, eat, and then complete their chores. The monks also provided for the community by volunteering their time and resources for hospitals, orphanages, and more. They even created libraries, educated people on the teachings of Christianity, and kept historical records. 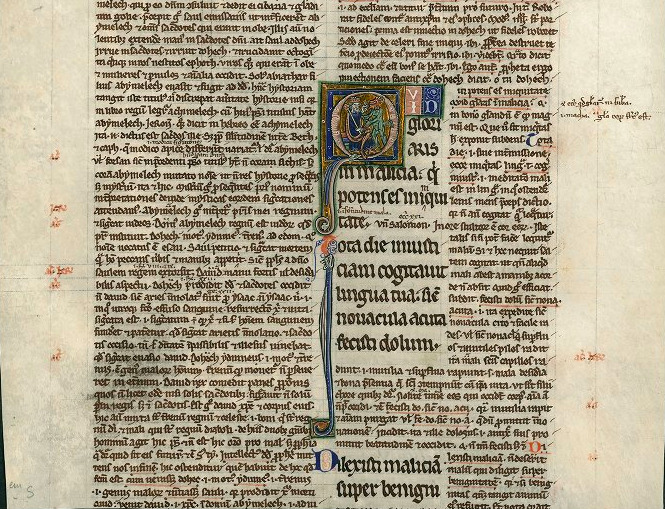 Bible Leaf of Psalm 51 from the CU Boulder Special Collections written in Latin from a French monastery c. 1210-1220.

Monasteries also had to recruit monks to keep order in their daily lives. Monasteries attracted a range of people from those looking for piety, to grow into a leadership role in the church, or the younger children of nobles. 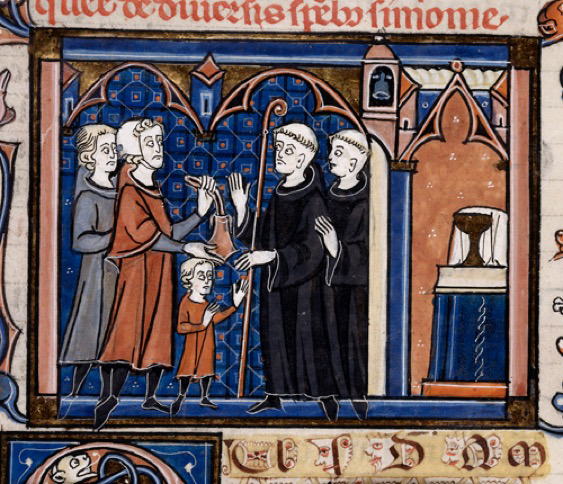 A child entering into the monastery as a noivce.

Children became “novice” monks either as a way of a family devoting one of themselves to Christianity or as a way to ensure proper accommodations. For all living in a monastery, there was usually food security and a straw bed guaranteed from the money the monasteries had access to.

The Myth of the Single-Sex Experience

Monasteries, nunneries, and abbeys all had a lot in common. One of the biggest commonalities was the utlization of a single-sex community to avoid distractions from devotion to God. For monasteries, they could keep their groups limited to males, but abbeys and nunneries had no choice but to allow for men in some aspects of their communities.

The 11th century saw a rise in women, especially noble women, taking interest in monastic life. Abbeys and nunneries were in demand to house women seeking to devote themselves to religious life. While women were allowed to take on a similar role as monks, there was one position they were banned from holding. Women could not be ordained into priesthood. Therefore the monasteries for women “relied on ordained men to provide certain aspects of their spiritual care: chiefly to celebrate Mass in their chapels… give last rights, and often to hear their confessions” (Griffiths 10). This meant that women, although in their own community, were still going to be spiritually outranked. However, women were not subject to daily orders from a priest. The abbess, or the head of an abbey, had authority over the priest. The abbess would choose a priest to carry out the tasks women could not, but she also had the power to dismiss the priest if she felt so inclined.