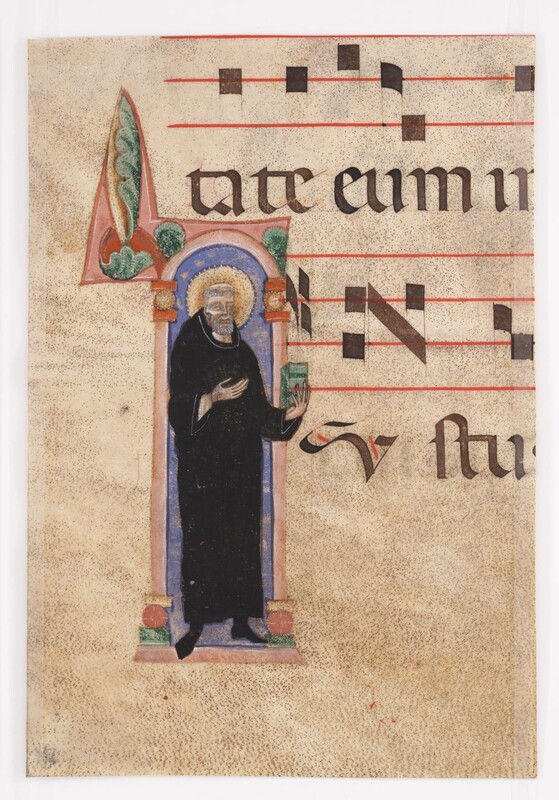 The Rule of St. Benedict

Written in 516 by Benedict of Nursia, St. Benedict's written Rule became the primary way of life for Catholic monks dwelling in monasteries both big and small.

Benedict himself (shown in illuminated form, left) started his spiritual journey as a hermit. Indeed monastic life originally began long before in solitude, with individuals seeking spiritual enlightenment by living ascetically on their own. However, Benedict encountered difficulties with the hermit lifestyle that did not lend themselves to what he envisioned a life dedicated to God ought to be. As such, he wrote the Rule; despite this, he continued to uphold a life in isolation as being the sought after ideal.

Those living under the Rule were subject to an extremely rigid set of instructions; for "every hour, every minute, of an individual's life was determined by the Rule, for every day of the year" (Greene 2005) and there were no exceptions.

The culture in an abbey was one of structure wielded with an iron hand; and that hand was not that of God, but rather of the abbots and elder brothers in the monastery, for "the strength of Benedict's Rule was in its recognition of human frailty" (Greene 2005).

With every moment of your life set in stone, with nothing unexpected ever happening in your cloister, how could one suffer the human ailment of idleness? To become idle was to open a gateway to sin. 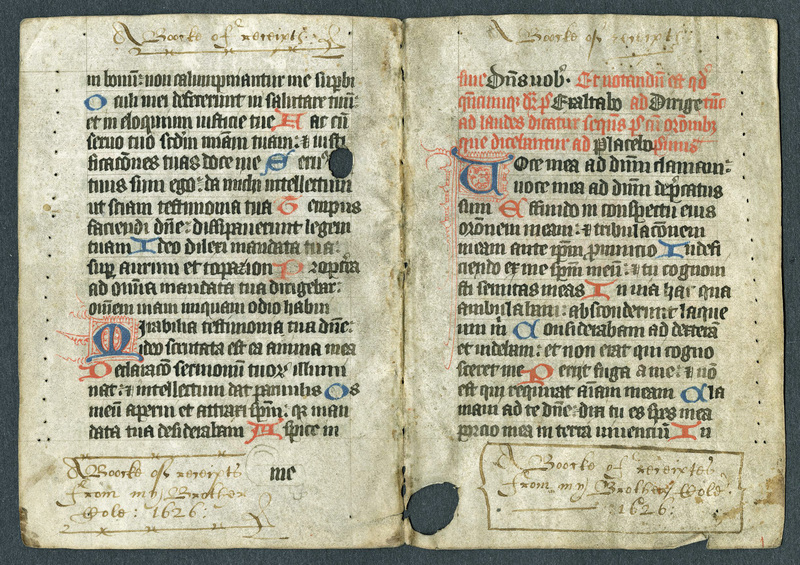 Adherence to the Rule

Monks lived a life of unmatched discipline and obedience (at least they were meant to). They filled their days with whatever the Rule willed, with edicts such as not being allowed to "speak useless or mirth-provoking words", or "not to love much or excessive laughter". Just a couple examples of many rules about such things, monks were expected to disregard all worldly pleasures and desires in any form, and live a life devoted entirely to Christ and their abbey.

The Rule included chapters on various topics, with many dedicated to excommunication or other punishments for the breaking of rules within. Perhaps some of the most interesting rules are the most trivial—at least in our eyes.

Chapter XXII focused on how monks were to sleep; in single beds of simple bedding with all of the men together in one room, or separated into tens or twenties if not possible. A structured sleep schedule might not seem particularly strict, rather beneficial, but the principle of the Rule is embodied here; everything is lined up for the monk, with nothing out of place and no room for interpretation or deviation. Yet men actively sought this life out, as did the women who joined cloisters as nuns.

Chapter XLVIII detailed the work a monk was to do, as "idleness is inimical to the soul; and therefore the brethren ought to be occupied". All of the images on this page are examples of what a monk may have done to keep his hands from becoming idle. 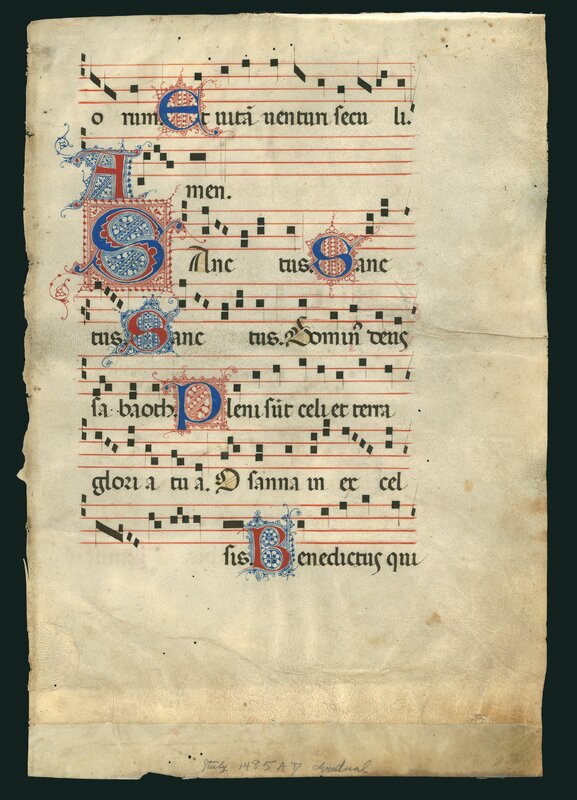 Some of the most invaluable work a monk did day in and day out was the copying and transcribing of the written word. Often this took the form of illuminated manuscripts, artistically designed and carefully scripted books or folios that were religious in nature—as all things produced in a monastery are.

A column from a 1894 edition of The New York Times puts the vision of a monk into the reader's head, claiming that they are "not a source from which we of this day might expect to derive examples of beautiful art work". Indeed that can apply to our day as well, with the assumption that envisioning a monk produces prayer and tonsures, not the elegant, colorful work as we see here. The newspaper goes on to say that our debt to monks is very great, and judging by the contents of the many illuminated manuscripts we have retained, one is inclined to agree.

The art at the beginning of this page is a fragment of an illuminated choir book. Due to the black robes of the man depicted, one can assume it is a Benedictine monk (sometimes called black monks because of the color of their habits), likely St. Benedict of Nursia himself. The book in his hand is then likely the Rule.

The manuscript directly above is an illuminated breviary. Breviaries were condensed liturgical books with hymns, readings, Psalms, anthems, and so on, all in a condensed form. All monks carried breviaries (De Hamel 1994), and breviaries could be either secular (used within the church to lead Mass or other organized prayer) or monastic (carried for personal use).

The manuscript to the right is an illuminated gradual. A gradual is a writing with the musical responses sang between reading the Gospel and other prayers, and eventually was a term for all songs sung during Mass (De Hamel 1994). All monasteries owned a gradual and they are some of the most common manuscripts we still have access to today. 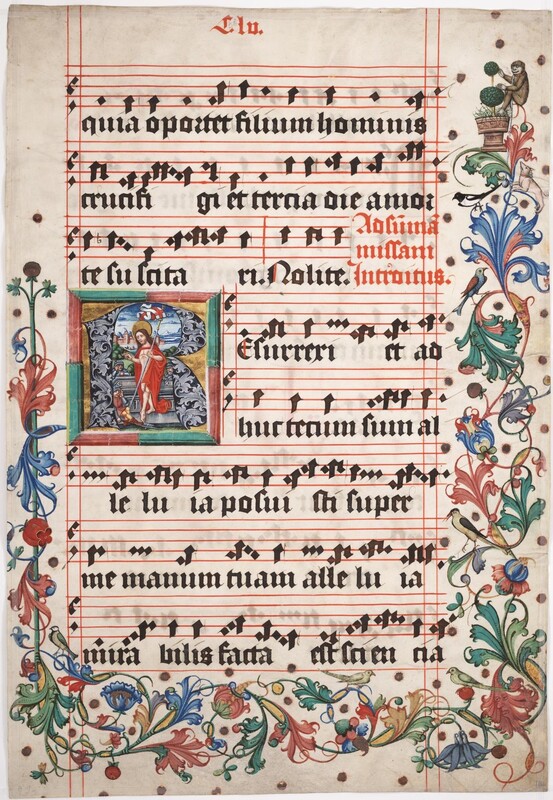 The Importance of a Monk's Work

Monks were some of the only people doing the essential scribe work we have drawn so much from. They were literate, unlike much of the population, and they spent much of their time reading and writing.

Illuminated manuscripts, which were owned not only by monks but by any (relatively wealthy) Christian of the Middle Ages, offer insight on the religious culture of everyday life. Bibles, both large and portable, could be intricately decorated, like the leaf shown below. Wealthy patrons of monasteries commissioned Bibles and other books and folios, keeping the monasteries afloat.

The towns surrounding the church and the monastery were also immensely important, for "monastic communities were inevitably linked to the lay communities from which they sprang" (Stöber 2007). There was potential, just by virtue of living near them, that salvation was closer at hand for those who lived in said communities.

A monk's lifestyle also provided a template for which all medieval Christians wished to live their lives. An individual more than likely had to fill their days with toiling physical labor rather than reading (which they likely could not do anyway), but the Middle Ages were God-fearing, and no one was more God-fearing than a peasant.

A monk's devoted life, his dedication only to the Trinity and all he did for it and his fellow man, was something to admire. And while your average poor medieval serf was perhaps not too concerned about charity or not "to love enemies" (as the Rule says), they were afraid of what would happen if they broke religious rules—and that speaks volumes about the overbearing religious culture of the Middle Ages. 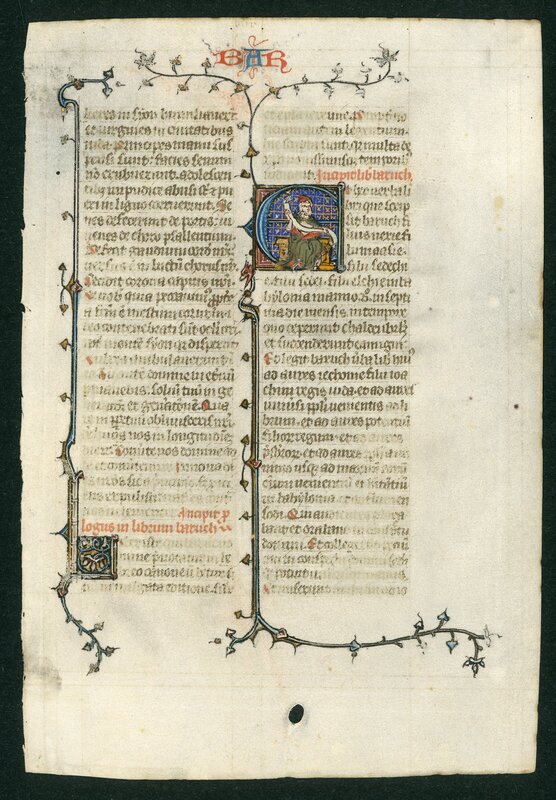