Life in a Scriptorium 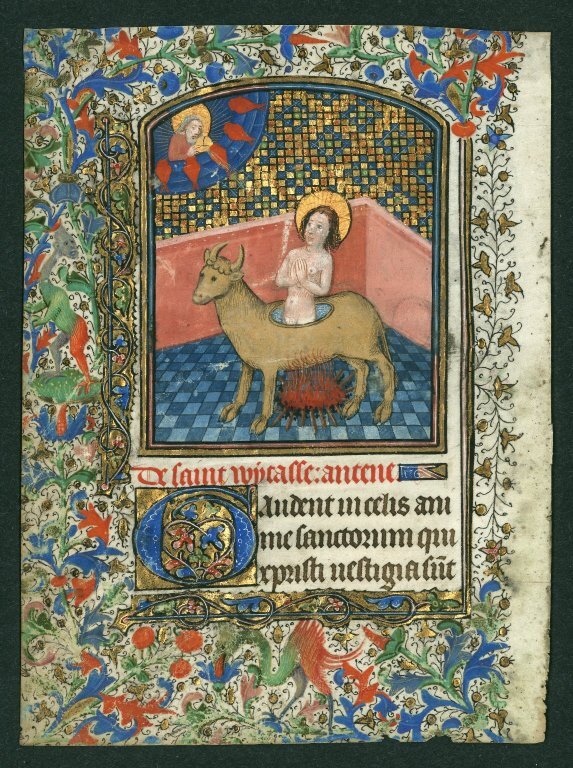 St. Eustace, originally a Roman Soldier named Placidas, saw a deer with antlers that held an illuminated crucifix. This gave way to his, and his family’s, swift conversion to Christianity despite warnings that Satan will test him, which proved to be true. First, St. Eustace lost his estate and servants, then his family. When rejoined with his family by the emperor, in an attempt to persuade St. Eustace to denounce his faith, he refrained. This led to his punishing of being boiled alive in a hollowed-out brass bull (Stern, 2019). The illustration above depicts this martyrdom of St. Eustace.

Many other martyrs’ martyrdoms were illustrated and put into the Book of Hours like St. Eustace’s. This was very time consuming because the Book of Hours was hand written and hand drawn. Many Book of Hours were made between 1550 and 1700 due to its popularity in the middle ages. While the manufacturing of the manuscripts progressively changed to a professional group of scribes and artists, many medieval Book of Hours were produced by the scriptorium in monasteries (“HIST 2170 - History of Christianity (Jobin) - Special Collections: Books of Hours, 1300-1550.”, 2020). With this in mind, the St. Eustace piece from the Book of Hours (above) was most likely made by a monk; meaning, that there were still monasteries in the medieval ages.

Monasteries were first founded as a way for Christians to “flee from human society, to leave everything behind, [and] to dominate the body and its passions” (Gonzalez 158). This was because it became harder for one to be a ‘true Christian’ at a time where martyrdom was no longer attainable due to Constantine’s proclamation. Coming out of an era of persistent threats of persecution, and into one of comfortable living, created an uneasy assurance making some people associate it as a “snare of Satan” (Gonzalez 157). Through the years, monasteries progressed from the seclusion of the early anchorites into great communities, often with hundreds of members. The same monastic movement that renounced books and schooling soon enrolled scholars. Correspondingly, a secular movement that often abstained from the majority of the life of the structural church was promptly embraced by bishops, which in time set the ideal standard for all bishops. This pattern of pliability is continued throughout the years.

It is important to note that with the monasteries’ acceptance of books and learning, coupled with their aspiration of sustaining ancient cultural traditions, prompted the monasteries’ well known recreation of scribing. From Pachomius, a devout Egyptian Christian, wanting all monks to be literate, to St. Benedict, author of Rule of Saint Benedict, establishing reading as an obligatory activity in a monk's life, finally to Cassiodorus, founder of Vivarium, pushing the act of simply reading towards copying texts of all kinds. Cassiodorus saw the duplication of biblical texts as publicizing the message of the Christian religion, which seems as grand a motive for any devout monks to conduct daily as a component of their demanding manual labor.

The process of medieval copying was exceedingly rigorous. Cassiodorus expected all scribes to inspect their work by encouraging correct and precise copying techniques along with even supplying suggestions on how to improve their grammar and spelling in Institutes. This reveals just how meticulous and orderly copying became during this time. This resulted in immense expertise and plenty of training as a requirement for a scribe because completing a single copy could take weeks. A monastic scribe typically would work at least six hours a day, and the finest, worked more than that; even to the extent that Cassiodorus would exclusively excuse them from daily prayers allowing them further time to work. These exemplary scribes would be given a clock and an abundance of candles, permitting them to work through the night. Scribes would work in an isolated room of the monastery called the scriptorium. The scriptorium functioned as a workshop for the scribes. It was commonly secluded, obligatorily silent, and overall unpleasant. Monks that worked in these situations repeatedly suffered from acedia, which is essentially clinical depression, causing the afflicted to act distressed, indifferent, and downhearted (Corwin 2016).

The amount of text was not the sole problem from medieval monks assigned to writing. Being that all manuscripts were reproduced by hand, various types of human errors altered them, whether it was passing over words, misspellings, hypercorrections, or even false interpretations. Even the most skilled of scribes could certainly fall victim to these errors by accident, distorting their manuscript without realizing, giving rise to the chaos of current scholars in assessing what the true manuscript said. These mistakes were so common that from the piece the monk was copying their manuscript, might have had a considerable amount of flaws, which is inevitable in their own copy even with the occurrence of no errors (Corwin 2016). 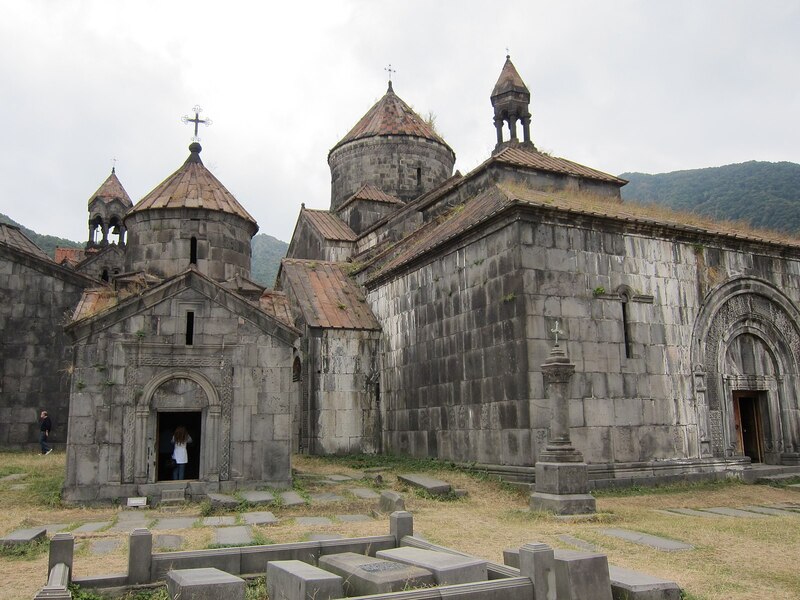 Although the middle ages is most known for the Black Death, the Crusades, the Hundred Years War, and the growing power of the Catholic Church, monasteries were still around. One of the leading centers of science and known for its abundant collection of manuscripts is the Haghpat Monastery.  Located in Armenia, the Haghpat Monastery was built between the 10th and 13th centuries. The monastery consists of a scriptorium, university, and a cafeteria. The scriptorium was additionally used to house texts and manuscripts until the Mongol armies began terrorizing Armenia, then the texts were relocated to caves around the monastery. Moreover, following the invasion of the Mongol armies, the monks were apprehensive of bringing the cherished manuscripts back to the monastery. Therefore, the scriptorium disguised itself as an area for food storage, with holes dug into the floor to hide the manuscripts (Advantour 2001-2020). 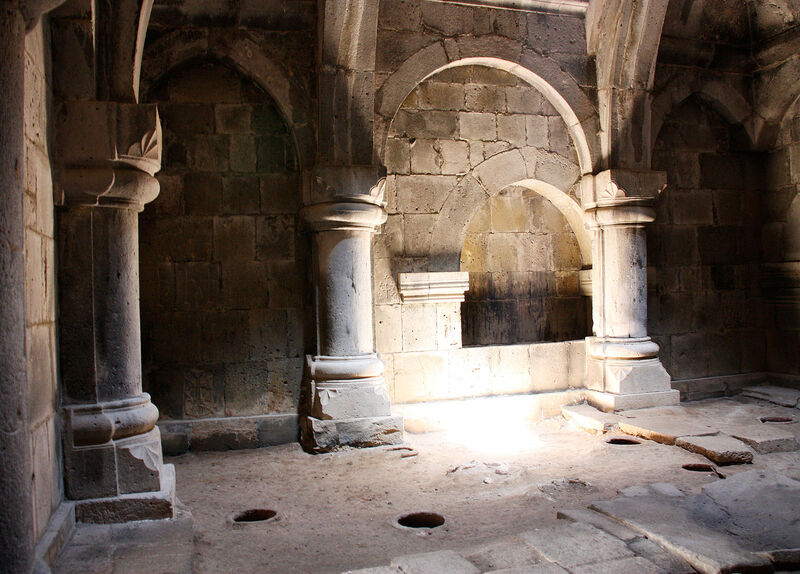