Throughout the history of early Christianity, the most remembered and revered names tend to be those of men. For example: St. Peter, Constantine the Great, St. Paul, John Wycliffe and Martin Luther, just to name a few. It was very rare for women to be recognized as significant leaders of Christianity at the time due to the lack of power and acknowledgement they had. Through studying the history of Christinaity, however, we now know that there are many powerful women that helped Christianity evolve into what has become today. It is also a common theme that many women who helped the Church, or even opposed it to try and better it, were persecuted and martyred like many men before them. 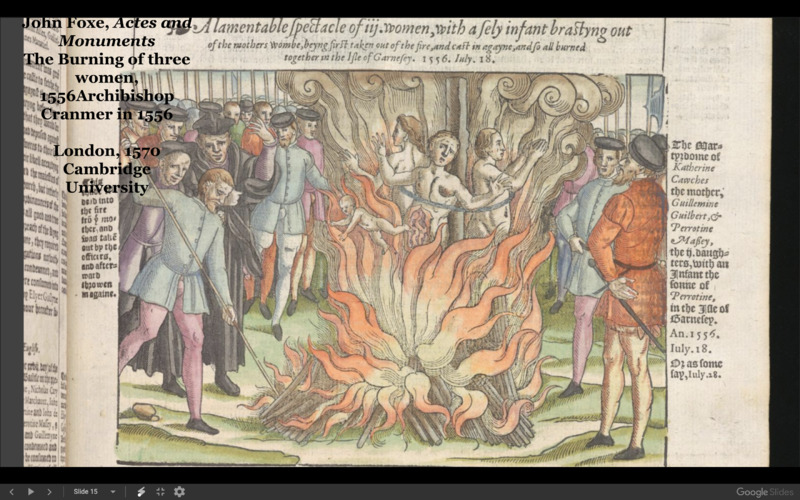 The Burning of three Women

A woman in Christianity that is better known is Joan of Arc (1412-1431). She was born in Domremy, France and into a peasant family of farmers. Her peasant background likely lead to her strong faith in God, and it is said by her friends thats he was greatly committed to God and in His service.

During this time, France was in war with England and her region had long suffered because of this conflict between the two countries. During this time, at age 13, she began to have visions. She claimed that these visions had the voice of God and that He encouraged her to see to it that the French nation would be renewed and out of the current conflict.

These visions helped her become or devoted to God and her religion due to the nature of her visions and what they entailed. It is said that she often went to confession and that she would go to church as often as she could. These visions, however, were not known to anyone but her until a later date. It is unclear why she kept these visions from God to herself for so long.

She then went on to charm Charles de Ponthieu and was given control of an army and was able to lead them into battle at the age of seventeen. She led the army to victory and was looked up upon by the men in the army as a powerful figure. Joan was later captured and given to England where she was put on trial for witchcraft and was later burned at the stake.

Overall, Joan of Arc was a very influential figure and leader of early Christianity and was one of the women that really helped the church get to where it is today.

Joan of Arc is known for her martyrdom as well as a leader in the army. 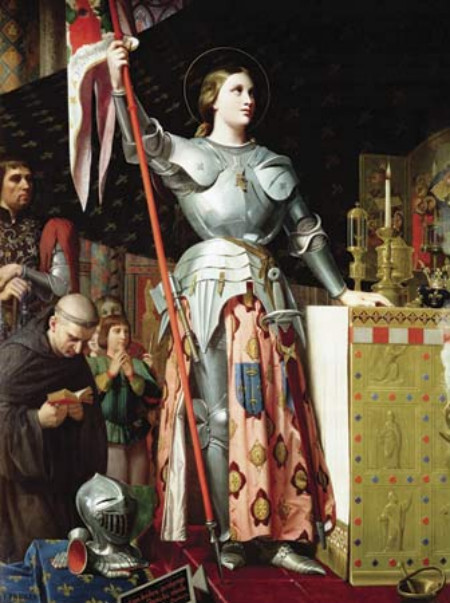 Saint Joan of Arc being revered

Saint Marcellina (327-398) was born into a Roman Christian family in Gaul. Her family later moved to Rome after her father had died. She then took on the responsibility of raising her younger brothers. She made it a point to try and live out a virtuous life for her and to set this example for her brothers.

Marcellina was a leader of a group of Christians in Rome around the 2nd century CE. The group that she was a leader of was called "Carpocratians." Marcellina, and many others of this group, were teachers of Christinaity. They taught a type of Christianity that put equal importance and balance on both men and women. They rejected the idea of private property as well as contrictive arrangements, like marriage. Marcellia and other strong women were present in these teachings and in this early Christian group.

Her life consisted of abstinence, fasting and prayer and dedication to teaching.

Saint Marcellina is known for her teachings and life of religious devotion. 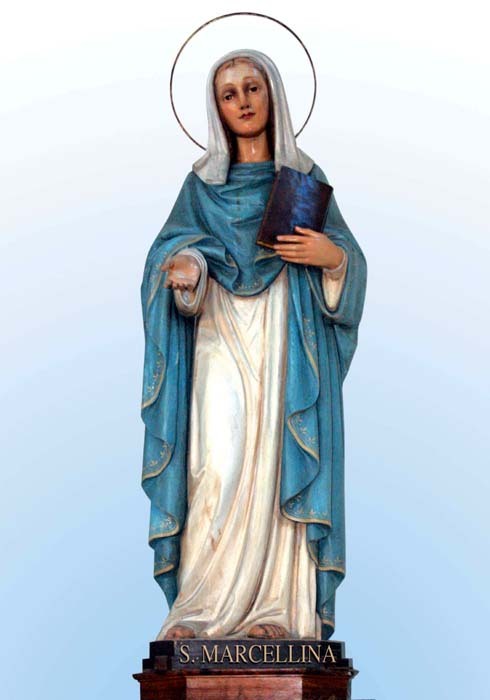 Saint Blandina was born in the time that it was a crime to be Christian that often resulted in martyrdom, angry mobs, burning of homes and other forms of persecution. She was a slave who was suspended on what looked like a cross and was exposed to wild, vicious animals. Blandina had repeated intense prayer while she was on this stake and reminded those who looked at her of Jesus being suspended on the cross. She eventually was taken down from the cross and was not touched by a single animal, she was then thrown in prison.

The witnesses to this miracle believed she was not touched because of her prayer and that God had spared her due to her devotion to Him. Eventually, she was taken from prison, put into a bag, and put in front of more beasts as her persecution for being Christian as well as her death sentence. It is said that she greeted death and did not fear it, for she knew that she had God on her side.

Saint Blandina was a very influential symbol of hope for the people in her town at the time. Her actions may not be as notable as other influential people in the history of Christianity, but it is known that some of the most powerful people of the movement are those who provide hope for the Christians that they were surrounded by.

Saint Blandina was known for being a symbol of hope for the Christians around her that God was with them and that they should not be afraid.

Saint Teresa of Ávila (1515-1582) was born in Spain to two Catholic parents. Her parents encouraged her to lead a life of prayer and devotion to God. When she was 16, she had been sent to a religious convent by her father to be educated and further her interest in the faith. She stayed there and became a nun.

Shortly after she became a nun, Teresa had fallen ill with malaria that made her very sick and in pain. At one point, she did not think that she could recover. During this time of pain and suffering, she started to have visions as well as a strong sense of inner peace. When she recovered, she met her faith with a new sense of vigor and even started to share her visions with others. She was discouraged to do this and was even told by a clergyman that they were visions from not God, but the devil. This caused her to lose confidence in her prayer and religious devotion.

At 43 years old, Teresa decided to open her own convent in Avila where nuns would recenter their focus on poverty and simplicity as well as prayer and devotion to God. Her guidance of the nuns was through strict discipline, with a strong focus on God's love and common sense. Her guidance of focusing on God's love heavily impacted the nuns there and made her a very influential leader and founder of the convent.

She then continued out her life by travelling around Spain and opening more convents with the same principles as her first. She eventually died at the age of 67.

Saint Teresa of Ávila was well known for her devotion to God as well as her ways of teaching in her convents across Spain. She helped change the lives of the nuns who were in her convents and in doing so, made the backbone of Christianity stronger in her area. 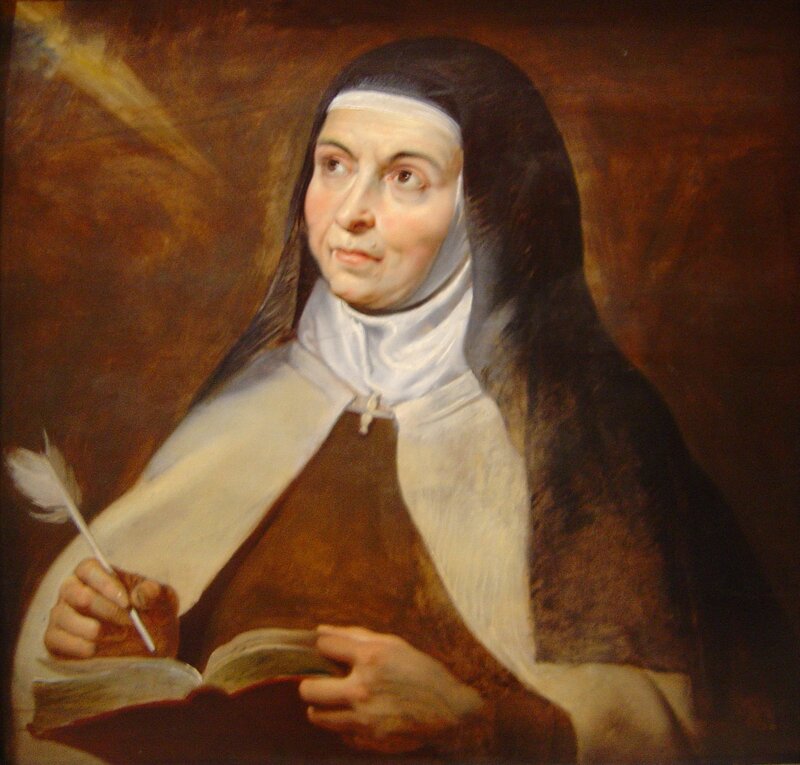